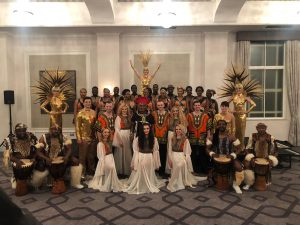 Following our exciting win – on behalf of Marella Cruises, in the ‘Best for Entertainment’ category at last year’s prestigious Wave Awards, we were delighted to be invited back to present the opening show at this year’s Awards gala dinner on March 7.

Our aim was to create a short show which not only befitted the occasion, but would astonish and amaze the hundreds of guests attending this year’s ceremony, hosted at London’s De Vere Grand Connaught Rooms. The results were Africa! – our exclusive musical and dance homage to the Serengeti – and it was a stunning success!

Susannah Daley, managing director of The Peel Entertainment Group said: “Africa! was a triumph – performed by an internationally diverse cast featuring the London African Gospel Choir, authentic African drummers and principal West End singers and dancers, it was a beautifully performed piece which looked amazing, sounded amazing and was so different and global – an absolutely fitting piece for these major awards.

“The show has attracted a deluge of praise and fabulous comments from all quarters both on the night and across social media – which is wonderful feedback for the company, its staff and associates. Africa! showcased Peel Entertainment’s phenomenal team work, outstanding professional commitment and determination to be the best we can be.” 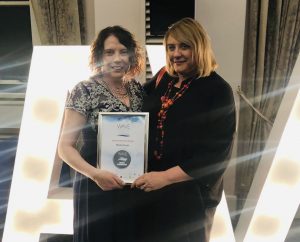 Peel Talent on behalf of Marella Cruises were additionally recognised on the night, being awarded Highly Commended in the Wave Awards 2019 for its on-board entertainment provision.

Now in its fourth year, the Wave Awards have become established as ‘the Oscars of cruising’ and promote 36 awards across six categories plus ‘Passenger Favourites’ voted exclusively for by the public. Further details can be found at www.thewaveawards.com.

Here is just a small sample of the fantastic feedback which Africa! received: 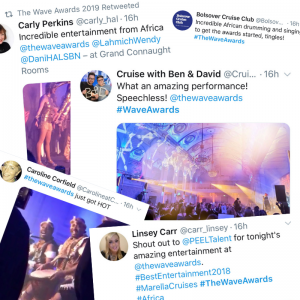 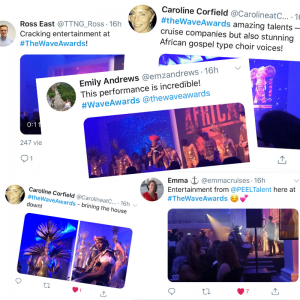